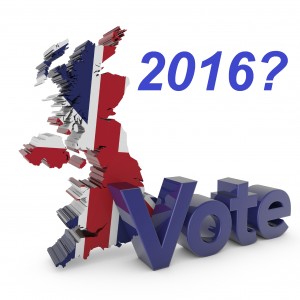 Is an EU Referendum in 2016 really such a good idea?

Instilling fear, uncertainty and doubt is one of the most powerful marketing ploys used to persuade customers to stick with the known product. Some business leaders exhibit all these reactions when confronted with the probability of an EU referendum. The fear is largely driven by uncertainty. Some business leaders seek comfort by attempting to share their fears, for others the solution is to play the ostrich and seek to avoid the referendum altogether.

The Director General of the British Chambers of Commerce John Longworth has another strategy telling The Financial Times that companies would actually welcome a referendum – but an early one – in 2016 rather than 2017. Less time, less uncertainty, but it is a mistaken strategy and one that would frustrate his members’ main aim. A survey of the membership of the BCC shows 64% say they wish to remain in the EU but with specific powers returned to the UK. For that the Government needs time.

Far from reducing uncertainty a 2016 referendum could create all manner of new uncertainties.  In 2016 we may not know the full potential of EU reform nor know in which direction the crisis hit Eurozone will lurch. We also can also not tell for certain what terms the UK would part on. A vote in 2016 could be a choice between two uncertain outcomes. Under those circumstances if the result was close it would not solve the question.

A more definite prospect would be to give time for both EU reform and the Eurozone crisis to run their course, creating a stable choice. For that 2017 itself leaves little time but is a more certain bet than 2016.

Businesses are not afraid of risk, they cannot operate without risk, it is an everyday occurrence, that can be planned for, analysed and if need be insured against. Uncertainty is a different and unsettling beast – something with an unknown probability or outcome. Business and financial markets have traditionally craved certainty and quantifiable risks.

But perhaps instead of an early referendum business leaders who fear uncertainty would be better served with a Labour victory as a way to avoid giving the vote altogether? Some in Labour would hope so, but this strategy is also misplaced. Longworth it right to recognise the danger, a Labour victory would not end chances of a referendum, mealy postpone it for a few years. In the meantime the Conservative Party may elect an ‘Outist’ leader. The chance of a referendum preceded by EU reform would be lost and the chances of an exit, preceded by years of uncertainty, would increase.

Recognising that a referendum is inevitable should lead business to another conclusion – seek to ascertain what a potential UK exit from the EU would mean for their specific businesses – to misquote FDR, if the fear some business leaders have is the fear of the fear of uncertainty, why not quantify it? Some sectors of the economy would be unaffected by an EU exit, some could benefit and some could be damaged – let’s find out what the practical problems are so they can be planned for and mitigated, reducing uncertainty and the fear of uncertainty.

We do not know which way the Eurozone will go or for certain whether EU reform will succeed, but by pushing for EU reform and planning for all eventualities British business can genuinely reduce uncertainty. In order to go about it effectively the Government will need time – 2016 is not enough.

This entry was posted in Blog and tagged EU, EU Referendum, vote 2017. Bookmark the permalink.