Could an ‘Outist’ big beast lead the Conservative party? 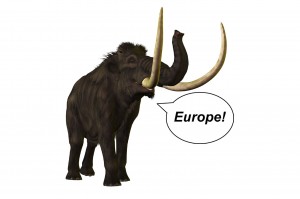 Conservative MPs minds are invarably turn to Regicide and Europe

Spring is around the corner, an election is in the air and the minds of Tory MPs are invariably turning to one thought – Regicide.

Lord Kilmuir once believed “loyalty is the secret weapon of the Conservative party,” unfortunately it has been left rusting in a warehouse alongside other army surplus equipment unloved and unrewarded in modern politics, by contrast the Conservatives’ other secret weapon – the ability to ruthlessly dispatch a defeated leader – is in full battle order.

That is not to say Tory MPs are not capable of concurrent activity, while earnestly and sincerely wishing David Cameron wins the election they can also think about what will happen if he does not. And when they do, and thoughts drift to other potential leaders, a pavlovian reaction occurs, they start saying out loud “what does Bloggins think about Europe.”

Well Bloggins is also interested in Europe, and is also keen to let MPs know what he/she thinks before time. A significant minority of Conservative MPs will be looking to back an MP who explicitly says they will campaign to leave the EU and under the Conservative leadership rules MPs will select the two candidates that go forward to a poll of Conservative members – the majority of whom support leaving the EU. Europe could once again decide who leads the Conservative party.

We have looked before at the ‘Big Beasts’ and their views, there are some new runners and riders in the imponderable leadership race and some candidates view have ‘developed’ in recent months – here they are the current Big beasts in the order they appeared in Conservative Home’s poll of potential leadership candidates:

Out of these potential leaders of the Conservative party six have either supported Brexit, or have come close, (Liam Fox, Owen Paterson, David Davis, Michael Gove, Philip Hammond and Chris Grayling). One, Cabinet Member Sajid Javid, recently stirred speculation that he was entering the race by stating exit “is not something anyone should be frightened of” and another front runner Boris Johnson has also joined the club by letting it be known he thinks Brexit “wouldn’t be disastrous.”

That leaves Theresa May as one of the most senior potential ‘Big Beast’ candidates in the ring not to make a major intervention on Europe. Although May has pledged to renegotiate the European Court’s power over Crime and Policing, she has showed little enthusiasm for making it happen, indeed she went along with taking the UK into a new EU crime and policing system. That leaves May as the potential candidate for the Conservative pro-EU group and the most likely Pro-EU potential finalist in any leadership race. However, it seems unlikely the Conservative membership will vote for a leader seen as having handed away powers to the EU if they were given another, more Eurosceptical, choice.

That leads to another potential finalist, George Osborne. The Chancellor has made his own European interventions once telling Die Welt “I very much hope that Britain remains a member of the EU. But in order that we can remain in the European Union, the EU must change” and then setting out his case for EU reform in a speech to Open Europe’s EU reform conference in January 2014. But as radical as these sounded at the time they now places him on the moderate wing of the Conservative party.

This entry was posted in Blog and tagged Conservative leadership, EU Brexit, Theresa May. Bookmark the permalink.